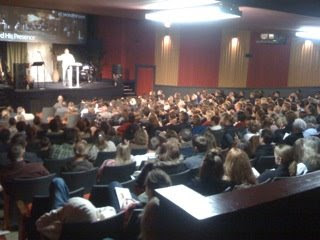 Today was the last weekend before we kick off the new Saturday night service. I am so stoked about it. The opportunity to minister to people who are kept from church by work or other commitments is exciting. And Saturday night services are just cool. Obviously, I will be going to all of them, but if I was attending a church that had the option it would definitely be the one I would pick. Today church went great, services were packed and 8 people made decisions for Christ! 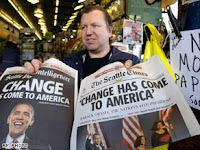 Yesterday newspapers all over the world ran the story of President-elect Barack Obama’s victory in the presidential election. People stood in lines for hours to obtain the front page story announcing America’s first black president, what they are referring to as “a piece of history.” The NY Times sold so many they ran two reprints through out the day. I saw one being offered on ebay for 600 dollars. While watching the news I saw a montage of people celebrating Obama’s victory over John McCain from all over the world. People from Japan, Kenya, France, and in Palestine were rejoicing and calling him a harbinger of peace. Some have claimed that he has single-handedly resurrected the idea of America as a great nation to the international community. I don’t think in my lifetime I have seen anyone lauded as a messiah-figure in this way.

Of course there are also those who are less than impressed by the results of the election. Some are appalled at his inexperience, and his stance on issues that matter deeply to them. Many have asked me what my thoughts are on the matter and specifically what a Christian’s response should be to an elected Commander-in-Chief that they disagree with in principle and certainly didn’t vote for. Allow me to let Paul to answer that question for me:

Obey the government, for God is the one who put it there. All governments have been placed in power by God. 2 So those who refuse to obey the laws of the land are refusing to obey God, and punishment will follow. Romans 13:1-2 NLT

The reality is that regardless of who you think was the right person for the job Barack Obama has been elected and that means God allowed it to be so. Daniel 4:17 says, “the Most High rules in the kingdom of men, and gives it to whomever He wishes.” Even if you or I were praying for someone else to win before, now our prayers should shift towards the leader that has been appointed. 1 Timothy 2:1-3 Therefore I exhort first of all that supplications, prayers, intercessions, and giving of thanks be made for all men, for kings and all who are in authority, that we may lead a quiet and peaceable life in all godliness and reverence. For this is good and acceptable in the sight of God our Savior.

I will say, however, that the world’s thirst for hope, and change, which many seemingly expect to be met by our next President, will surely be disappointed. And that wouldn’t change even if it had been someone else who had won the election. The reality is the person who works in the funny shaped office at 1600 Pennsylvania can do a lot of things, and we should pray that they do them with wisdom and according to God’s will, but they can’t offer true hope or change to anyone. If you want to read the description of the One who offers lasting hope, peace and change to this world check this out:

And standing in the middle of the lampstands was the Son of Man. He was wearing a long robe with a gold sash across his chest. His head and his hair were white like wool, as white as snow. And his eyes were bright like flames of fire. His feet were as bright as bronze refined in a furnace, and his voice thundered like mighty ocean waves. He held seven stars in his right hand, and a sharp two-edged sword came from his mouth. And his face was as bright as the sun in all its brilliance. When I saw him, I fell at his feet as dead. But he laid his right hand on me and said, “Don’t be afraid! I am the First and the Last. I am the living one who died. Look, I am alive forever and ever! And I hold the keys of death and the grave. Revelation 1:13-18 (NLT)

We shouldn’t forget that Jesus is the only one who can bring lasting Hope to a life and Change to this country or any other one. He will return to this earth @ Worlds End and set all things straight. Until then don’t be tempted to check out prematurely. We need to pray for our next president and all our leaders, not waste energy complaining that they are in charge. If the early church at Rome, that Paul wrote to, could pray for Emperor Nero and others who would persecute them than I think we have no excuse not to pray for our governing officials. And we need to stay focused on getting the gospel out like we truly believe we are living in the last of days. God desires all men to be saved and to come to the knowledge of the truth and so should we!

“For exaltation comes neither from the east Nor from the west nor from the south. But God is the Judge: He puts down one, And exalts another.” Psalm 75:6-7 6
This is a promise that we need to keep in mind on this election day as many are concerned and tempted to be afraid. Ultimately it is in God’s hand and we can trust Him. That doesn’t mean that we shouldn’t act. First of all we should be praying and calling upon Him to bring Godly leaders to he helm in this nation that will do their best to keep us from shipwreck. This is so important. It was John Bunyan who said, “You can do more than pray, after you have prayed, but you cannot do more than pray until you have prayed.” Secondly you can exercise your God-given responsibility to vote and to do so through a Biblical worldview. Some feel discouraged because of the results of the early polls or the exit polls and may be tempted to ask the question, what’s the point? But everyone needs to vote today. Who knows but that you were here for such a time as this? Several people have told me that they don’t feel like they know enough about where the different cantidates stand on different issues and a great website to get equipped before voting is Wallbuilders.

Because I knew I would be out of town on voting day I voted absentee before leaving Montana for the wedding that I was in this weekend. I also knew I was going to be gone on Sunday so I also preached absentee as well! Typically when I am away we bring in guest speakers to fill the pulpit at Fresh Life or hear from one of the other gifted pastors at the church. As I prayed about it I just really felt like we needed to keep the momentum that we had built in our At Worlds End study. So I studied like normal and preached the message on camera then we played the tape after the live worship. I am told that people tracked with it and were studying along like normal. One cool thing about getting the kinks worked out of this technology is that it will allow us to use it in the future if we launch satellite campuses in other parts of Northwest Montana. Getting God’s Word out is God’s heart and like Paul told the church at Thessalonica, I pray that from our church the Word of God would sound forth from our city, not only to the immediate area but the whole region. It was a little strange preaching without an audience but once I got going it felt normal. 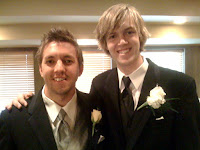 Here is a picture of my friend Nathan Heitzig and I from right before his wedding. We have been lifelong friends and it was a thrill to be his best man and watch him and his beautiful bride Janae get married. He is a youth pastor and a rad guy. I am more used to doing weddings than being in them but it was a lot of fun and also great to see Nate’s dad, Skip Heitzig, who married them choke up and cry as he performed his only son’s wedding. My daughter Alivia was also in the wedding as a flower girl and was Soooo cute. (If I don’t say so myself.) 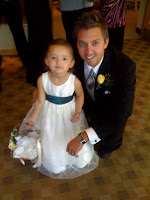 You can listen to my Sunday morning message, caled RoboChurch, here.