In just a moment I am going to go speak to a gathering of youth and senior pastors on behalf of the Billy Graham Evangelistic Association on the importance and challenges of reaching the next generation. A topic I definitely am passionate about. This is gearing up for a series of outreaches this summer that Franklin Graham will be preaching at–more info here.

I once bought a pair of jeans on eBay that turned out to be a counterfeit–and a lousy one at that! (They didn’t even have a slit for the button to go through.) I thought of them while studying this week. I just preached on the Antichrist from Revelation 13. I’ve never done a whole message on him before. As you may know, anti means,” opposed to,” but also means, “instead of.” So he is against and trying to replace Jesus. What occurred to me was just how much the “opposition” aspect is his attempt to bring about the “instead of” phase. His, and satans, end-game is to replace The Father and the Son and to be worshipped. Anyone who won’t worship him will be killed. But this is a perversion of the real Jesus, who said, if you won’t believe in Me, you are already condemned. Tragically those who worship the “bad eBay Jesus” and get to live are eternally dead. In contrast to that those who remain loyal to the real Jesus, now and then, though they die-yet they have eternal life. It was a radical study. Two more services in the morning, stoked to see what God will do, one lady made a commitment to Christ!

The camera died before the fun did, but I really love the awesome and dedicated group of guys I get to serve alongside here at fresh life. David had mighty men that God called to fight with him and that’s how I feel about the pastoral staff at this church. They are all very unique and different in their passions, temperaments and gifts. As a group we definitely prove the truth of 1 Corinthians 1:27: “God has chosen the foolish things of the world to put to shame the wise, and God has chosen the weak things of the world to put to shame the things which are mighty;” In that we are all probably a little A.D.D. and potentially insane. But it is very inspiring and thrilling to spend time with them, pray together, and brainstorm about how we can creatively accomplish what God has called us to in these last days we are living in.

I realized this morning that it was one year ago today that I broke my leg. It is by far the gnarliest thing I have ever been through, but God was there in the midst of great pain. I have been looking forward to this mile-marker because my surgeon told me that it takes 365 days for a femur to fully heal. woo-hoo! And I am very stoked that I don’t have a limp anymore either (or as my physical therapist called it, a hitch in my giddyup.) 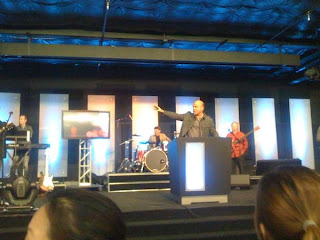 I just got back from a quick trip to Orange County, California for the launch of a very exciting Bible study. Greg Laurie, who preaches at the Harvest Crusades and pastors a church in Riverside, California began a new Thursday night outreach and I was thrilled to be there for day one. (Grabbing lunch at In-N-Out wasn’t exactly torture either.) Even though it was the first night, the place was packed and there was a total buzz and energy to the crowd, you could tell that people were amped about it. After a great time of worship, Greg gave a solid message on who God is, and invited people to give their lives to Him. 120 people of all ages responded leaving their seats and streaming forward, indicating repent from their sins and turn to Christ. Talk about a great start! You can read more about it on Greg’s blog. Having lived there, I still have a heart for Orange County and am so stoked about what God is going to do through this new venture. Keep it in prayer. It was also refreshing to go to church and be on the other side of the pulpit for a change. If you live in Southern California make sure to make it out on thursday nights. Info here.
By the way, I did see the irony in the fact that the one year anniversary of my injury was on Friday the thirteenth and that I happened to be hanging out with Greg who was with me when I broke my leg–not that I am superstitious or anything–it was, however, a funny coincidence.
I am very stoked for church this weekend at fresh life–Revelation 12 is crazy–I was studying it on the plane today and the dude next to me seemed a little freaked out when he saw I was reading out of the book of Revelation. (His eyes got big) Later in the flight he asked me about it, which ended up leading to a really rad conversation about Jesus and end times and life and death. Since he lived in SoCal I told him about the new study and he said he was going to go check it out. Neat. My message this weekend is called The Underworld and the chapter gives a behind the scenes look at Satan and his whole kingdom. (*Spoiler Alert–he is going down!)

I preached on the two witnesses in Revelation 11 this weekend. It is one of the wildest passages I have ever taught. Just imagining two dudes who can spit flames, turn water into blood and call down plagues at will is crazy to think about. If you missed it here is a clip of what I said I would do with those kind of skills. In addition to their pyrotechnics they will also be preaching the gospel and pleading with people to repent of their sins and be saved. At the end of their 3.5 years on the earth they will be murdered, lay dead in the street for 3.5 days and then with the whole world watching they will rise from the dead and ascend to heaven.

One thing that struck me was how their story is a microcosm of the believers life. They had a limited time on the earth, lived differently than the rest of the world, spent their time focused on witnessing and at God’s appointed time they died but death was not the end. We can find a parallel’s on every level for our lives–ok, you might not be able to call down fire from heaven. But the rest works–you have a brief time on this earth and the goal is to minister to everyone God gives you the chance to. Just like the two witnesses were willing to confront the culture, and challenge the status quo for us, fitting in” shouldn’t be priority number one. Paul said in Romans 12 to not be conformed to this world, but to be transformed by the renewing of your mind. We should also be comforted by the fact that God knows the day of our death, it is precious to Him, because we will be with Him face to face. Nothing can happen to us before God is ready to bring us home.

I’d say the biggest difference is that they knew exactly how long they had on the earth–and we don’t. I was looking at the different applications for the iPod Touch and iPhone in iTunes the other day and was surprised to see in the top 25 most popular apps one called iDie. I looked at it and saw that it counts down how much time you have left if you make it to the national life expectancy rates, which for men is 76 and women is 80, in this country. Interesting. I downloaded it and punched in my gender and birthday–and it told me that my life is 35 percent over and I have somewhere over 18,000 days to live. Which immediately seemed like a very small amount of time. I thought, geez–I don’t have a second to waste! The app has a disclaimer in the instructions that says, “Results may vary.” I saw that and it struck me, as short as it seems, this is best case scenario. I may not have 65 percent of my life left to live, I may not have 6 percent. Besides the many different ways we could die before reaching old age, we also can’t rule out the possibility that we might be living in the last days and years before Christ returns. I read in the news that in Washington State anyone who has been told they have less than 6 months to live can request a lethal prescription from their physician so they can put an end to their life. But the reality is that any one of us may have that short of time in front of us, we are all “terminal” after-all. And as long as we have breath in our lungs–it’s not time to give up, but to press on.
All of this shouldn’t freak us out–but it should give us perspective. Look up 2 Peter 3:11 and see what outlook you should have on however many days God gives you on the earth and pray that God helps you live them powerfully. We should live out every day as though it were our last, looking to the finish line, not giving up. Lookup 2 Timothy 4:6-8 and live today so that if it were your last day on the earth you would be able to say what Paul did at the end of his life.

Nothing of depth here–seriously–If you don’t want to waste 40 seconds of your life that you will never get back, just leave my blog now.

K, now that it’s just you and me–here is a video that for some reason made me laugh today.