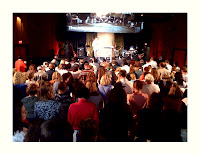 Yesterday we began our new series studying the book of Revelation. We went around town and asked people when and how they thought the world is going to end. The answers were pretty bleak, and for the most part admittedly confused concerning the end times. There is no need for any Christian to be ignorant–the book of Revelation proves that God wants us to be aware of what’s in store for this earth and those on it. In contrast to preconceived notions, it is a book full of hope, certainty and good news. 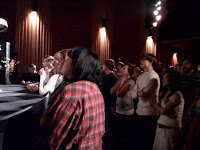 We covered the first 8 verses in a message called, Time is Running Out. Some shy away from reading and teaching on this subject, I even have a friend who was invited to speak at a large church but was asked not to speak on anything controversial like end-times stuff. But the way I see it, if Dave Matthews can sing about, “When the World Ends,” the Muse can sing the song, “Apocalypse Please” and U2 isn’t afraid to sing about the “Last Night on Earth” why should we be afraid to declare what God has plainly revealed? People were stoked and we had overflowing crowds for the launch. Second service people were sitting on stairs and on the floor. At both services people responded to the invitation to receive Christ, second service a dozen people came forward, mostly young. It doesn’t seem like we will be able to go too much longer without adding a third weekend service…crazy. I am psyched on this study and am sure it will be a blessing because God promises anyone who reads, hears and keeps the teaching of the book will be blessed. (Reveleation 1:3, 22:7)
You can watch, listen or download the message here.
Here is the video we showed at the service.