I saw this video on Greg Laurie’s blog, which if you don’t read–you should! And I was so stoked seeing the big picture of the way God has used Greg and the Harvest Crusades in 2008. We have been honored and blessed to have Greg come and speak at our church a number of times and it has always been epic. (I always feel like fresh life is getting an elephant gun where they are used to a fly swatter, but I know he really enjoys his time in Montana, and so did his son Christopher.)

I esteem him highly (1 Thessalonians 5:12-13) and admire the mixture of his gifts both as a pastor, who loves to teach the Word, and as an evangelist, who brings the good news to lost people. There is no one whose style and example I have looked at and tried to follow as much as his. And I am so thankful that he has taken the time to take me under his wing and mentor me as a young pastor. Part of it has been through sitting under his teachings, which I do ever week through podcasts and webcasts–Thank God for Technology. And a major part has been through being his friend and watching his life preach the same message his sermon does. He became a pastor at an even younger age than me and has given me so much practical advice and wisdom starting out as a church planter.

This has been a bitterly hard year for Greg and his family, walking through the valley of the shadow of death, yet they have feared no evil, remembering that the Lord is with them. Greg gave the last message at the Preach the Word conference on pain. Both dealing with it in the ministry yourself, as he has this year as his beloved son, Christopher, went to heaven, suddenly and unexpectedly. And ministering to people who are hurting as we all will. I am continually stunned watching how bravely he has faced the pain, keeping his mind on Christ and his heart set on reaching out to others, and he is a steadfast example in suffering for me as he has been in service.

I know you will be blessed by watching the video which shows the impact of this years Harvest Crusades, and if you have partnered with Greg in prayer or through supporting the crusades–it is fruit to your spiritual account as well.

Keep this final Harvest Crusade of the year in prayer. It is a one night event at the historic Madison Square Garden. 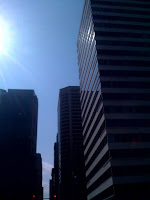 Today was the last night of the Greater Philadelphia Harvest Crusade. I woke up early (still a bit jet-lagged as I have been each morning while on Montana time) to study because I spoke to the whole Harvest team at a Sunday “church” service. I spoke on John 12 where Mary, the sister of Lazarus, worships Jesus. She was criticized for her worship but the Lord said, “she has done what she can.” That is all that God wants from us, I told the crew that has been serving so hard to put on this crusade, no matter what it is we can do. For some it’s webcast, others organizing volunteers, for Greg it’s preaching, but everyone’s contribution is a valuable act of worship. Then it was onto famous Philadelphia blueberry pancakes–I feel like I have gained about 100 pounds on this trip (Philadelphia Cheesesteaks, Cheesescakes, Cream Cheese–it’s all so rich!) I am going to be coming home a much bigger person I am afraid.

I spent much of the afternoon just walking around downtown Philly getting lost in the urban jungle. I had the chance to invite several people to the event as well.

Tonight was the last night of the crusade, but it ended very well. Music by the Katinas and Mercy Me. At our wedding Jennie walked down the aisle to “I can only imagine” so it is always very special to hear it and I was glad they included it in their set. Greg gave a killer gospel message to the 12,000 people in the audience from John 3. He showed how Nicodemus had a 3-fold encounter with Christ–face to face, mind to mind then heart to heart. Through that Nicodemus learned what it meant to be born-again and have the promise of heaven. It was very powerful. At the invitation 1,016 people came forward to indicate that they wanted to turn from their sins and turn to Christ. In all 45,500 attended the three days and there were 3,365 decisions made. One of the local pastors told me something fascinating. In all of Philly’s history this weekend sits in the top 3 largest evangelistic meetings that have ever taken place. The other two that it is up there with are George Whitfields meetings in the 1730’s and BIlly Graham’s Crusade in 1992. That means that this weekend was not only eternally consequential but also historically significant. Very cool! Especially when you remember that Philadelphia is the murder capitol of the country with 400 every year. That means that someone is murdered at a rate of one every 22 hours. What’s more, 6 police officers are murdered every year or one every other month. All in the city of brotherly love!

Praise the Lord that His love was powerfully shown this weekend. I was so stoked to have gotten to be here for it and to host on Friday and Saturday.

I am very excited to get home to see my girls and to start the “At Worlds End” series in Revelation. I haven’t forgotten about my promised blog on the Philly CheeseSteak–I’ll try and get that up during my layover after this next flight!

P.S.–Here is a little vid I grabbed interviewing Bart from Mercy Me backstage:

Night #2 always seems to go smoother and for the Philly Harvest Crusade this was definitely the case. All the technical kinks from the opening night had been dealt with and last night was smooth sailing. The Wachovia Center filled up with a capacity crowd of 19,000 people and unfortunately a few people were turned away (but definitely invited back for Sunday night!) The musical guests were Kutless and Toby Mac with opening worship by the Katinas. There was a ton of energy in the room. During Greg’s powerful message on what it’s really like to be in heaven and hell everyone really seemed to be tracking and 1,374 people, many of whom were young, came forward to make decisions for Christ. All represent many prayers that have been prayed by loving believers for many years no doubt. Here is a little video I shot from the stage right after the invitation (at the time the estimate on the response was ballpark because the cards obviously hadn’t been counted yet.)

Here is a birds-eye photo of the stadium during the invitation that I snagged off of the Harvest Crusades blog, which has tons of photos, videos and articles on it, that gives you some scope of the response. 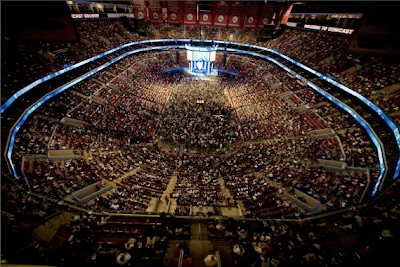 I am so thankful to the Lord that I have the chance to be apart of the awesome ministry he is doing here in Philadelphia. You can watch the archive of the event in a flash video here.

I just woke up to a phone ringing and when I answered it to my suprise the voice giving my wake up call welcomed me to the city of Philadelphia. It took me a moment or two to remember why I was in Pennsylvania exactly. Three nights of Harvest Crusades at the  Wachovia Center. The flight from Montana out here yesterday took a good majority of the day (Kalispell is not exactly a major hub and I had to fly west to Seattle first) but I had plenty of time to study for my new series, At Worlds End, I begin a week from Sunday. I was, however, assigned the seat from hell–the middle seat on the very last row of the 757, which on a 5 hour flight is rough! I survived, but I forgot about US Airways new thing about charging for coffee which wouldn’t be a problem if I had remembered to bring cash. But I didn’t and they didn’t take cards. I was pretty close to selling my birthright or trading my iPod for a cup of coffee by the time we landed! Had a chance to have dinner with Greg and Cathe who had just got in as well and drive past the venue and pray for the weekend.

Please keep this event in prayer! I will be updating often. On another note, I am so stoked that my friend, Nate Holdridge, who pastors a rocking church in Monterey, California will be speaking for me this weekend at Fresh Life. Nate has been a good friend and is a gifted Bible teacher. I have been trying to get him out for a while and I am so glad this weekend worked out. 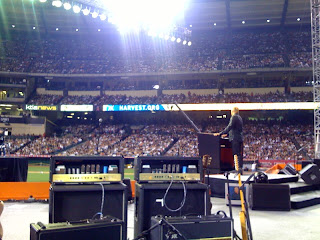 I will do another blog on this when I get wifi, but Saturday night ripped. The crowd was over capacity, 2,000 people were turned away! Over 4,500 commitments to Christ. 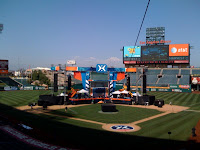 Last night was day one of the 2008 Southern California Harvest Crusade. This is the 19th straight year that this massive outreach has taken place. I don’t know of any other annual crusade in the country that has been running as long in evangelistic history. It is so exciting to pull up to the angels stadium, from the airport to the event I saw bumper stickers promoting the event the whole way here. I had to go straight to the crusade because of the rigorous taping schedule. 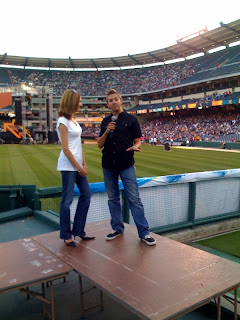 agreed last minute to be an on camera personality covering the Friday and sunday nights for TBN. This basically meant working with a female cohost, shooting opens, band interviews, and at the end telling the home audience how they can give their hearts to the Lord just as those in the stadium have. They will be taking all the footage, interviews, messages and opens and closed and creating dozens of shows out of them so it got tiring at times saying the same thing 6 different ways. But I pray that God will use it. TBN will be running these shows on their youth network, JCTV which is aired in 600 cities around the country. (if you have never heard of it–I hadn’t either.). The real highlight of the night was gettig to see Greg preach on the stage that Topher designed for the gospel. It was amazing design, I will post a closeup of it later, and Greg tore it up. I have never seen him so “on” passionate and on fire. Chris’ life was used tenderly as a powerful illustration and It was moving to hear Greg talk about him. He said, I hit rock bottom, but God was there and He will be there for you too, you don’t have to be afraid. He invited people to come to Christ and have the promise of the heaven that Topher is experiening, many came, it looked like thousands, into the outfield and made professions of faith. Awesome!! Tonight I will be emceeing and stoked out of my mind to see God move.