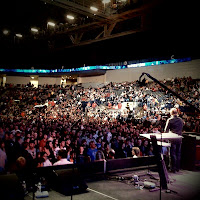 596 people made decisions for Christ last night at the Black Hills Harvest Crusade! Greg gave an awesome message from John 5 called, “Do you want to change your life?” Here is a shot I snapped while Greg was praying with all these people as they called on the name of the Lord. So Rad. Although I love getting to travel with the Harvest team to big cities like Philadelphia, and San Jose–something about being in a smaller area is really special. Because in a city with a population of only 50,000 like Rapid City, the 1,000 plus people that have made commitments thus far is a relatively large percent of the total population. I love the thought that this city is literally being turned upside down by Christ through this weekend! What a pleasure to be apart of it. According to Luke 15:10 even one sinner who repents is enough to light up heaven. The music and energy was great tonight as well. 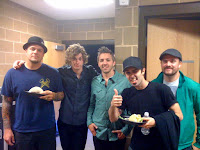 Here is a shot with Relient K. They put on a good show, and mixed up. During their set they broke into a cover of the theme-song from The Office as an intro to one song, and parodied the Subway 5 dollar footlong jingle–you don’t get much more random than that. One more night to go, excited to see what the Lord will do tonight.