Ever since I was a little kid my favorite Bible character (besides Jesus) was always David. I loved his whole story: slingshot victory, musical skills, flight from Saul, long and winding ascent to the throne, response to his sin, and similarities to our Savior–all of it. I can actually trace this back to the day it began. I was young, 5 or 6, and I wandered into my dad’s study where he was preparing a Bible study and had a teaching tape on by Greg Laurie. It was called “David: His Calling pt. 2” and was the second installment of a character study on David’s prolific life. I was really into it. So much so that I asked for it to be played again as my bedtime story that night, and for many, many nights to come. I still have the tape, it’s sits on my shelf reminding me of the power of the Word being sown into a life at a young age. 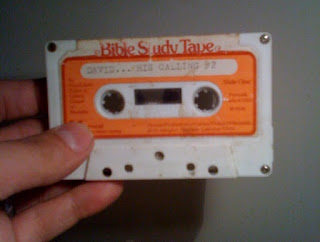 For the last year I have been so amped to go through the books of 1 and 2 Samuel at fresh life’s midweek study. It has been 32 messages and counting so far and I dig David more now than ever. He was by no means perfect–far from it. But even when he made mistakes, he applied himself to repentance as aggressively as he had to temptation once he was convicted of his sin. Hebrews tells us that as we run the race of this life we are surrounded by a great cloud of witnesses who are urging us on. This reminder comes in the wake of the hall of faith in chapter 11. I like to think of David and other saints of old cheering me on as I make my pilgrimage through this earth. His successes and failures both inspire me to take sin seriously and to look unto our Savior as I run. I can’t wait to meet him in glory!

Who is your favorite character from the Bible–and why?