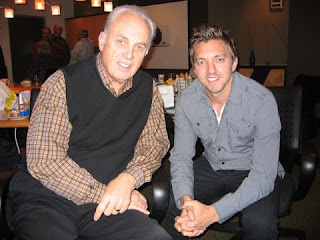 I was blessed by the opportunity to meet John Macarthur.  I felt like I was hanging out with a chapter to be written about in future church history books.  He has been ministering to the body of Christ for decades by Unleashing the Word of God–one verse at a time, as his ministry slogan has been from the beginning.  My dad gave me a love and appreciation for Dr. John’s teaching and I grew up with the clarion call of his voice constantly coming from our radio speakers. One massive contribution he has made to the Body of Christ has been his New Testament commentary series.  So many expository teacher have benefitted from them. I know I do.  As you study the scriptures they provide exhaustive bulldozer work to dig up gems hidden in the text.  Another tool that so many believers have benefitted from is the Macarthur Study Bible.  I refer to mine on a regular basis and enjoy it very much.
He spoke at the Preach the Word conference on how Christ is the head of His Church and when preachers will accurately unpack the meaning of the Bible, preaching the Word verse by verse, we are allowing Christ to communicate to His Church.  He gave rich background on how this doctrine was handed to us on a river of blood by those who gave their lives defending it through out history.  Before he spoke he was apart of a question and answer panel and when they were asked how a preacher can be relevant and not compromise his integrity in the process he said something to the effect of:  “You don’t have to make the Bible relevant, it is relevant, our job is to show people exactly how relevant it is.”
Words fitly spoken!  He was very cool in person and quite an encouragement to me as a young pastor in the ministry.  I got to share with him a little about fresh life church and I told him that I have really been enjoying his commentary going through the seven letters to the seven churches in Revelation and he was very glad to hear that his books are blessing our little church in Montana.  The funniest thing was standing backstage with him while Greg Laurie was introducing him before he spoke. Greg was giving a very nice introduction, talking about how many thousands of radio stations his teachings were on and how much he respected him and so on and so forth.  John turned to me and said, “I feel like I should be dead….the way he is going on, this could be my funeral.”  It was very funny, but very neat to see such humility up close.
Should the Lord tarry, John’s teaching, preaching and writing will no doubt still be a major help to believers a hundred years from now as they seek to understand the Word of God and I am stoked that I got to sit and listen to him teach in person.