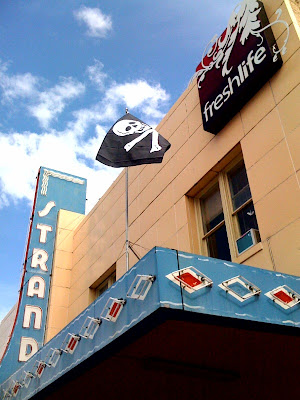 On June 17th, 2006, exactly 3 years ago, I preached a message at Ocean Hills Church, in Southern California, on Jesus’ journey to Golgotha to be executed. In the sermon I called attention to the fact that Jesus died at the place of the Skull and in it I said something to the effect of, Some day I’d like to start a skull church. I looked back and the line was even in my sermon notes. (Here it is pasted in as I had it written down: “I Kind of want to start a church/ call it skull church and have a logo on it.” I think I meant that it would have a skull logo on it) Little did I know that three years later, to the day, I would preach at Skull Church’s first service in Kalispell, Montana (of all places) and that there would be internet viewers watching from Texas, California, Brazil and New Zealand. It was rad, standing room only, the oveflows were packed to capacity and the place was full of energy. Best of all, 10 people responded to the invitation and made decisions to follow Christ!

We didn’t plan for the date to be on the birthday of the first skull sermon I preached, in fact we didn’t even make the connection until, in a spontaneous fit of nostalgia, I dug up the message last night . It struck me that God had brought a vision, that He had put into my heart, to life. I thought of Acts 2:17, which says, ‘In the last days,’ God says, ‘I will pour out my Spirit upon all people. Your sons and daughters will prophesy. Your young men will see visions, and your old men will dream dreams. It didn’t exactly happen how or where I thought it would but God makes everything beautiful in it’s time. So don’t be afraid to have vision, and dream big!

The skull church podcasts and video archive will be available on a one week delay from the day they are recorded so look out for it next week.