I have been down in Southern California for the Preach the Word conference since Monday. Since then I have sat in on 11 sessions under the teaching of some of the most profound and respected Christian leaders on the earth. I have felt a little like a kid in a candy store listening to hours and hours of Bible study from people I admire and admittedly want to be like when I grow up. I have taken page after page of notes (something like 30) and God has been really speaking to my heart. It will take me some time to be able to fully process all that I have been learning because there has simply been so much. It’s almost as though after each session you want to push your chair back, linger and reflect about what a gourmet meal you just ate, but there’s no time because you are headed into the next session to be served up some more 5-star truth. I think I will be like a cow, chewing my cud from this conference as I reflect on my notes and ponder all that I learned for weeks to come.

What was very cool was that there these guys weren’t just giving polished “conference messages” but really sharing their hearts. They were very blunt, honest and open about the struggles and sweetness of ministry. And there were several panel discussions and other times where very practical nuggets of truth were produced in additions to the formal sessions. 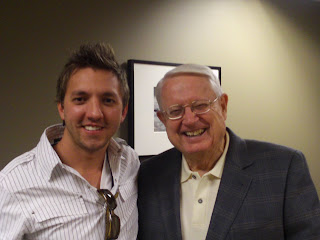 Off the top of my head (and keep in mind it is one in the morning and my seven AM wake up call is drawing near) I would say that I have been the most deeply impacted by Chuck Swindoll. I have been listening to his teachings and reading his books for years but this was my first opportunity to listen to him in person. Wow. What a powerhouse. Chuck’s voice is unmistakable, his delivery is impeccable, and his content is inspirational. He spoke two times, once on dealing with problem people in ministry, he called it “Boars in God’s Vineyard” and another time on what should be involved in studying, preparing and delivering sermons. He was super practical, very open and vulnerable and you could really see his heart, both for the Lord and for us, the next generation of pastors coming along behind him and others upon whose shoulders we stand.

I had the opportunity to meet him and chat for a little while. He was very cool. He is 74 this year and I can definitely say I hope and pray to be as faithful and going as strong as he is if the Lord tarries and I reach that age. I definitely want to run the race of faith with endurance as he has.
His final words in his message were challenging and have been ringing in my ears: “In this tragic but marvelous era in which we live, there is no substitute for the prepared man of God to deliver the Word of God, so STAND AND DELIVER! I’m counting on you.”

Here is a little video I shot before a question and answer session started today
And Here is an article that the Christian Post wrote about the conference.